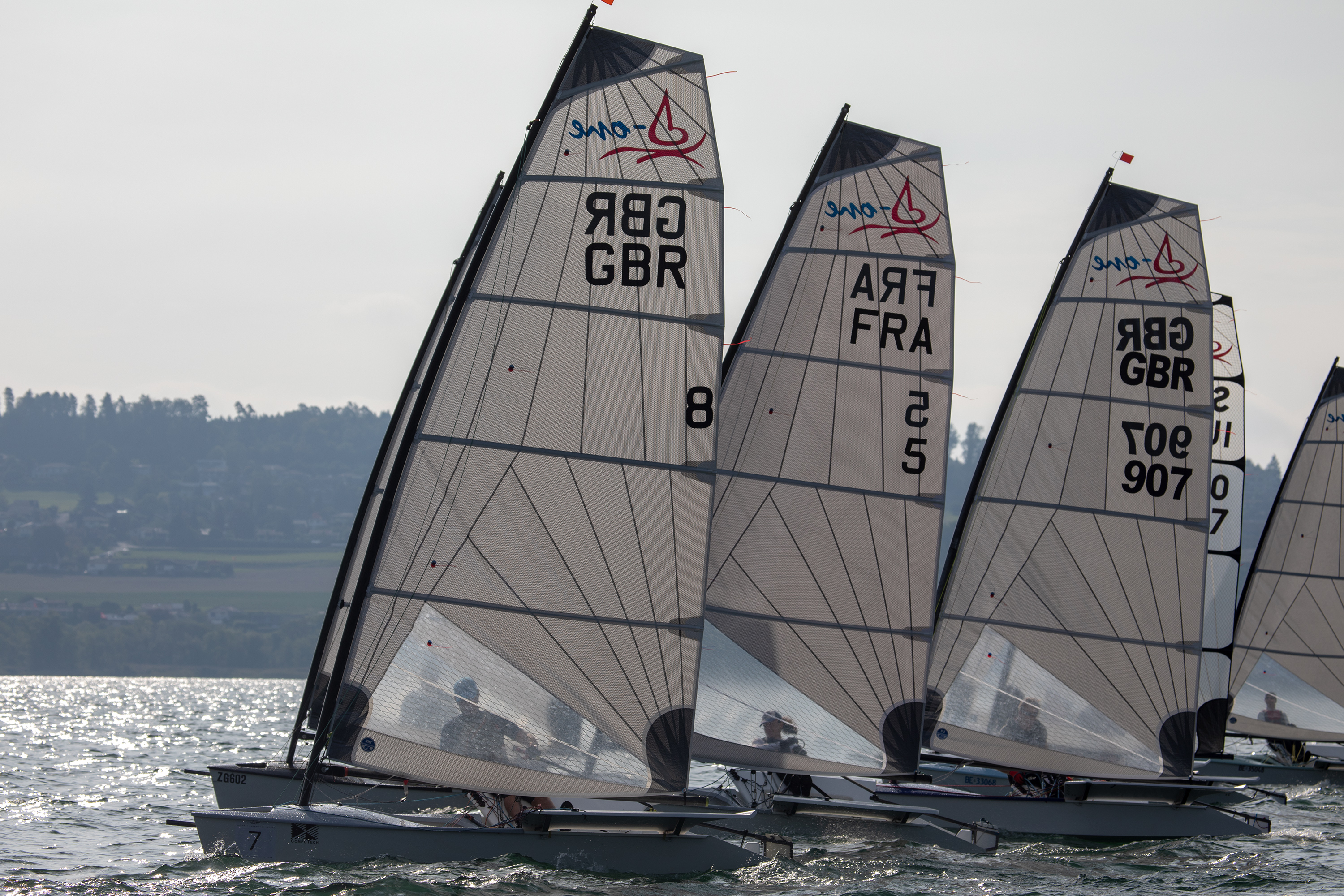 The Swiss D-One fleet hosted this championship in the hamlet of Wingreis in the far west of the country, on a grassy meadow by the stunning lake with a view across vineyards to the snow-covered Alps. The Swiss watch-making capital of Biel, three miles up the road, provided enough hotels, bars, restaurants and expensive watches for anyone.

The event started with a break from tradition - no T shirt!  Instead we were given a D-One Swiss (not army) multi knife. No complaints there.

Yacht Club Bielersee have a lovely little club and an amazingly helpful group of volunteers in a great setting but also, as feared, a slight absence of wind.

We did manage to get out for some practice racing before the main event, so a chance to check we had all rigged our boats correctly.

On Friday we gathered at the club and..no wind. OK a postponement, no problem the sun is shining more boat fine tuning. I made a nice uv cover for the pole with recycled water bottles and duct tape and made some small adjustments hoping to get s little more power in the expected light breeze. Just when we thought there would be no racing for the day enough breeze appeared to get us out for one light airs race. Sadly my tuning efforts resulted in no pointing and no speed. Glad we just had one race. 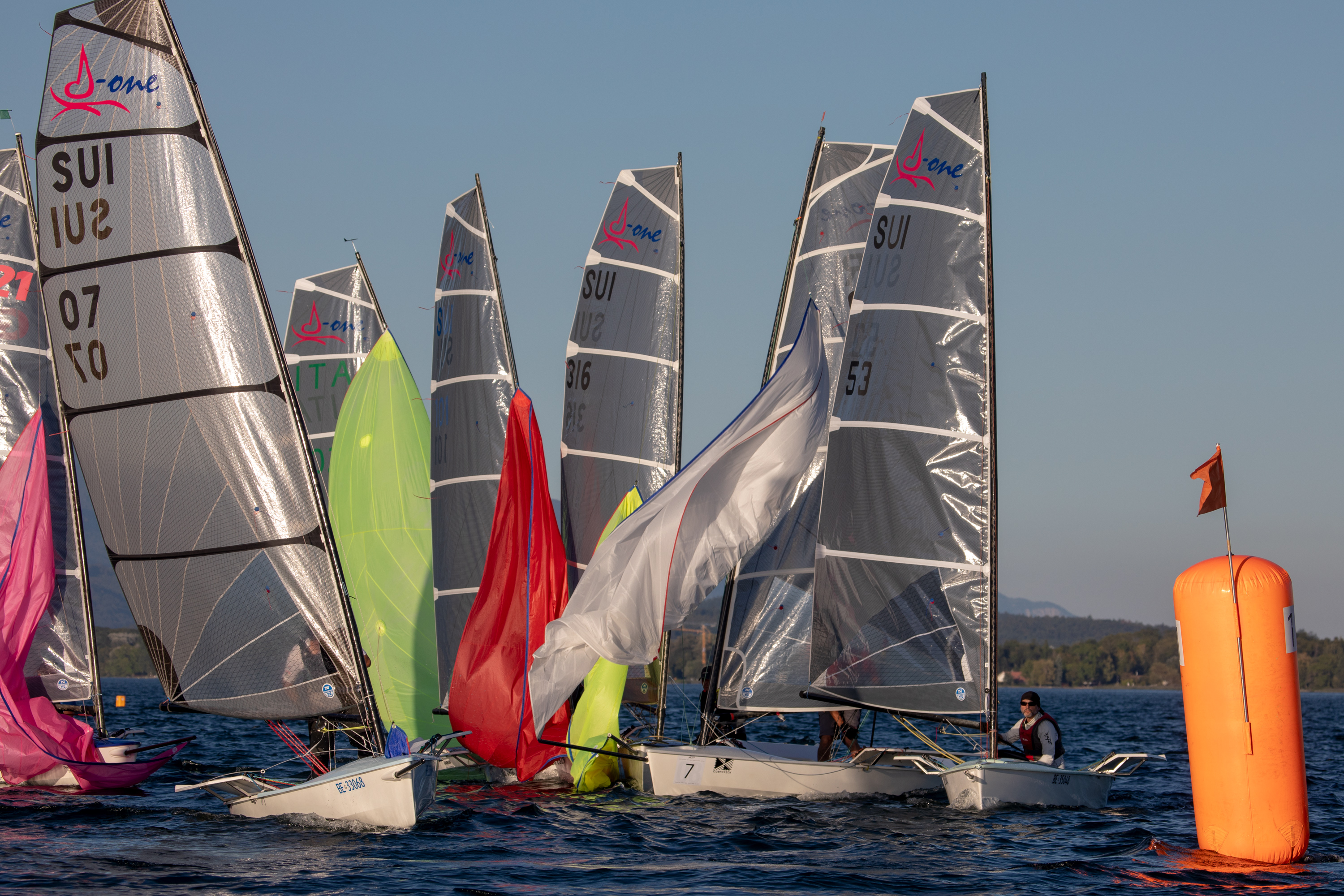 Saturday, we launched to a much improved breeze. Just enough for me to use the full 95.9kg upwind and suddenly the boat was flying, swapping places with the race leaders and narrowly missing a race win.

After 3 good races the wind went and then returned enough to get  a start for race 5 Stefan found clear air and was already half way up the second beat as the rest of the fleet drifted from all angles into the first gate. By now the wind had all but gone and the race was abandoned.

We went ashore to wait and just when you thought it might be over for the day there was enough wind to launch for another start and this time race 5 was completed.

Sunday started calm again and with still no sign or prospect of wind proceedings were rightly cancelled early with no objections from the fleet.

Viktor Teply was a very solid winner, with Marek Bachtik in second place to complete a CZE triumph, and also to take the Masters trophy. Stefan Hess (AUT) was third just ahead of Nick Crickmore (GBR) and Piotr Machel (POL). The Ladies Prize was won by Marie Benoit (FRA).

Souvenir hats, raclette cookers to take away and chocolate bars for all were given away at the prize giving..

And for the future.....at a very positive class meeting we also confirmed the major events for next year, which look very attractive indeed:

There are also plans afoot for a Franco-Italian Alpine Championship in Aix Les Bains in April, to see if the French can avenge their defeat at boules during the Gold Cup, and for the always-tempting Italian Championships at Rapallo at the end of May.

And for the GBR contingent, we confirmed our Natonals for Coniston SC 14-16 August, which will be a first visit to the beautiful Lake District for the fleet.

We even planned further ahead, and it looks as though in 2021 we will travel to Portot Rotondo, Sardinia for the Europeans in May, and then to St Gilgen, Wolfgangsee for the Gold Cup in September.

Devoti confirmed that they will continue to offer charter boats for these events - contact Viktor Teply at This email address is being protected from spambots. You need JavaScript enabled to view it.

So book your holiday dates, and even if you don't have a D-One, book your charter boat! See you there.